This is, of course, a very different proposition to acting my age.  I have largely avoided acting my age, and when I am called upon to portray an adult in a public setting then “acting” is very much the mot juste.  In this context, I am very much NOT a follower of Messrs Stanislavski and Strasberg – I go with the “just pretending” school.

One the whole, I do not feel my age – unless there has been a dreadful accounting error and I really am only 22 (or thereabouts).  Over the summer, a number of incidents illustrated the distance between my internal view of my age and actual chronology have been allowed to diverge over the years.  I have realised that when in the company of “proper” adults – generally, but not always, those of my age or greater – I feel rather like a child who has been allowed to stay up past his bedtime and as though I don’t really belong.    With those aged around 20 (±5), I feel as though I am among equals and act as though I am just one of the gang – which I presume they must find a little disconcerting (or just creepy), but probably endure as I’m quite good about buying the beer.  When availing myself of the cake at T H Roberts in Dolgellau, I felt far more at home with the very youthful staff then with the more stricken-in-years clientele – despite being much close in age to the latter.  I suspect there must be quite a backlog of updates to my self-image waiting to be installed in a cloud or buffer somewhere – and long may they remain there!

My pretence at continued youth is also being bolstered by my gymnastic exploits.  A little while ago I learned that one of the other clients of Brightside refers to me as “the gymnast” (as though this were my profession – which luckily, for my continued solvency, it is not) and today discovered that I am a major topic of conversation among their wider clientele (in my absence, fortunately).  It would appear that I am a marvel of the age (or at least, my age) – though to be honest, it is just practice and a bit of application on my part.  At the risk of frightening the horses (you will be seeing a lot of leg), here is a picture of me practising one of the progressions towards the elusive back lever. 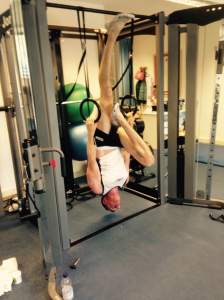 The more perspicacious reader may have noted that my head seems very pink (née red).  In my defence, I would point out that I am upside-down and this is a hold – but I will admit that I do not recall seeing this same effect on real gymnasts.  Luckily, according to the Mortician’s Gazette, I see that some gymnastics is to be televised next week so I shall have an opportunity to check out the head-directed blood-flow of the participants.  I suppose it may be that hanging like a very distended bat is not a highly regarded activity in proper gymnastics…

So, why you may wonder should I be feeling my age?  Well, partly it comes down to hanging around with the young and recalling an incident from my adult past, only to discover it occurred before any of them were born.  This can really take the wind out of a chap’s sails.

However, the spark that ignited this post was going to see the film Pride a week or so back.  The film is excellent (if you haven’t seen it, you really should) and (mostly) set in 1984 – the year in which I took my A-levels and started university.  Yet, even to me it feels like a period piece and I was shocked to realise that I was basically an adult when it was set.  The vehicles, in particular, look to be from a bygone age.  It made my feel very old and to wonder if it is time for me to start buying Werther’s Originals, carpet slippers and a tartan rug.

NO!  I refuse to act my age!  I refuse to wear anything made of fleece!  I shall re-double my efforts to grow old disgracefully.  I feel in need of a new age-inappropriate hobby to take up (to add to the gymnastics).  What do people feel about seeing a man of 48½ on a skateboard?  (I promise to eschew the strangely sculpted facial hair and pony tail).  I’m also willing to entertain suggestions for other pursuits which would allow me to retain my juvenility – but, be warned, if I like the idea I may act upon it and you may later be exposed to photographic evidence thereof!