Readers will recall my disappointment at Mazda’s use of the term SkyActiv to refer to a 14:1 compression ratio in a vehicle engine.  So, I have attempted to give some better meaning to SkyActiv through my own, drab, wretched existence.  OK, that is mostly a lie – but I am going to pin two recent events (with pictures) to this weak conceit, so please stick with me a little longer (or not, frankly I’ll never know whether you bailed at this point or not).

My attempts to master the back lever whilst hanging in the sky, supported only using a pair of gymnastic rings and my general henchness is progressing quite nicely.  Below those with a strong stomach (crucial if attempting the back lever) can see a photo of the current high water mark… 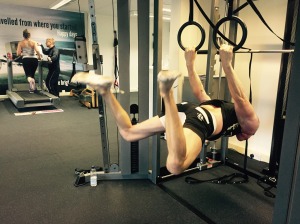 I will admit that having my legs straddled does make life a little easier, as it engages my glutes automatically, as does bending my legs, which moves the load a little nearer the effort (for those who can remember the workings of mechanical advantage from your school days).  I will further admit that whilst I was just about holding this position at the time the photograph was taken, I did collapse to the ground milliseconds later.

Some of you may be concerned about the absence of sky, what with me being indoors and the sky generally being a property of the outdoors.  In response, I would suggest that my location is unimportant for the feat being attempted, I could as easily be outside – though at this stage, could not readily be much further from the ground (as I need something to collapse safely onto).  I do also wonder whether the sky can perhaps “leak” indoors – through an open window or door, or even through an air-brick.  Further, if the ceiling was very high (1 km say) would you still deny there was sky indoors?  You see, this blog is not just me bragging – there is an actual philosophical component too!

Yesterday, I was in London – not (I wish to make clear) for an interview.  After not being interviewed, I had a brief stroll around the Greek galleries at the British Museum (checking out the stolen goods) using eyes, which inspired by Alistair Sooke’s excellent recent BBC4 documentary, were able to to see the art in a whole new way.  I was then taken to luncheon by a friend (at his employer’s expense – at which stage I should once again make clear that I had not been to an interview).  This took place in the Darwin Brasserie, which offers merely adequate food and fairly slow service, but can supply one killer advantage (in addition to the excellent company) for the luncher (an advantage which, luckily, makes it relevant to this post).  Below I include a photograph taken from my lunching chair whilst my companion was briefly away.

Lunch in the Sky!

The brasserie is located in the Sky Garden on (or actually above) the 35th floor of the building popularly know as the “walkie-talkie” (or more prosaically as 20 Fenchurch Street).  It is not the most beautiful tall building in the world, but is far from the ugliest in London (or even its immediate vicinity) – and I believe has melted at least one car (which I view as a positive: a building with a super-power!).  As you can see, it offers quite stunning views of London and does have an actual garden (I was quite tempted to see if a position as gardener might be open, as I can’t imagine many weeds make it up there) – and even a balcony.  I was lucky to visit during a spell of quite beautiful (and poorly forecasted) weather with excellent visibility and the views more than compensated for any minor grumbles about the meal.  You can visit the Sky Garden without dining – and it is even free, though you do have to book in advance.  To reach the dizzying heights on offer, you will have to pass through airport style security scanning and there can be quite a queue for the lift (in both directions) but it really is well worth a visit.  On a clear day (as I was lucky enough to enjoy) you could spend hours looking out over the city, spotting the sights and watching the world go by so far below you.

So, despite the weak premise I think you will agree that I’ve made a much better fist of being SkyActiv than the boffins (or marketing types) at Mazda!