Spring is sprung!  Trees are greening and on my way to Salisbury I saw lambs!  And not plastic wrapped and divided into small pieces in a supermarket freezer as I usually glimpse them: no there was actual gambolling afoot.

Even on my way to the station, there were two sources of joy for my inner child.  First, a Southern Water employee probing the ground with the largest dipstick I have ever seen: it was at least 3 feet long.  Second, I saw a sign advertising a forthcoming operatic production, but it was partly obscured by some street furniture.  As a result, I can bring the world my new LGBTQA take on a Puccini classic: Adam Butterfly.  We may need to re-locate the action from Japan, where I suspect Adam was not a common name among the indigenes in the late nineteenth century, but such re-imaginings seem to be all the rage on the stage of today.

I nominally went to Salisbury to go to the theatre to see a play about the First World War, the end of an era and an almost love story.  I can’t handle too much sunshine without a little literary bleakness to balance it out!

As I travel by train, I reached Salisbury somewhat early as I like to leave quite a serious margin between my planned arrival time and when I actually need to be at my destination.  I never dibbed (or, indeed, dobbed) as a child but I do use trains quite a lot and it pays to “be prepared”.

My early arrival allowed me to take the short stroll from the station and across the water meadows to enjoy very fine views of the city’s cathedral.  This is a long way from the worst bit of time-killing I’ve had to indulge in over the years!

Upon my return to Salisbury station, chastened from the Harrowing of the Shire and the demise of love’s young dream, I was greeted by the Earl of Mount Edgecumbe.  Not a scion of the aristocracy looking to me for advice on achieving the common touch: though for a suitable fee, I am available to consult in this and many other areas.  It was the Castle-class GWR locomotive of that name (originally, and less confusingly called Barbery Castle) in full steam.  What a glorious and romantic sight it made with only Class 158 Sprinter Express DMUs for company.  However, I couldn’t help but think that with a station full of these – especially a well-canopied one, or worse yet Birmingham New Street – air quality would quickly become something of an issue.  Perhaps they are best left for high days and holidays… 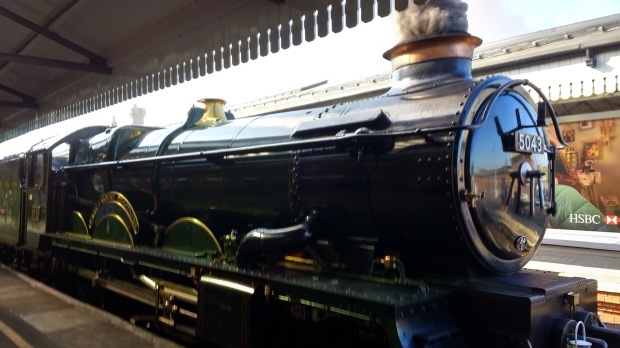 It’s only a chuffing earl!