Writers are often asked where their ideas come from.  Oddly, I have yet to be asked this particular question: I am forced to assume that my public persona is too forbidding and people are afraid to approach me to raise such an inquiry.

Extrapolating from my huge sample size of one (viz me), still more evidence than will be supporting most of the claims we’ll hear between now and early June, I would imagine that writers find this question almost impossible to answer.  I have no idea where my inspiration comes from or fails to come from (as the case may be).  In general, it comes from doing stuff and being out in the world, rather than staring into space in my tiny garret – but beyond that the affairs of the muse are subtle and thrillingly mysterious.

Last night I enjoyed a very entertaining evening of storytelling at the Art House.  This was far from my first experience of storytelling.  Many years ago, an unfortunate Argentine, who had the misfortune to look to me as his line manager, claimed I was unable to say anything without turning into a narrative: he probably had a point.  Back in the mists of time (ok the mid-nineties), I was an habitué of the Cumberland Arms in Byker to enjoy the regular storytelling evenings run by A Bit Craic.  On a couple of occasions, I even summoned up sufficient pluck to tell a story myself.

As well as the traditional elements of such an evening, the two storytellers last night (Jason Buck and Mike Rogers) filled in the space before the performance and during the intermission by playing a game of chess: well, after a fashion.  As I arrived, there were hints of Det sjunde inseglet, though it quickly became apparent that there would be more laughs on offer than are traditionally associated with the work of Ingmar Bergman (I can’t speak to his private life, which may have been a complete laugh riot).

I think they started with a plan to play chess to the rules of Monopoly, but this quickly morphed under the influence of the audience.  Elements of Mornington Crescent, Connect Four and Play Your Cards Right soon arrived and then my surprisingly extensive knowledge of the back catalogue of the band Queen came to the fore: gained not through direct experience, but spending a lot of time in the podcast company of John Robins (and Elis James, Prods D and V).

It was at some point during this interplay between the audience, the storytellers, a chess board, the streets and stations of London et al that we we found ourselves led to Kennington Oval. From nowhere, my subconscious decided that I should sing this (out loud to the assembled minitude – like a multitude, only smaller) to the tune of Getting to Know You:

🎶 Kennington Ov-all about you etc.

[I’m afraid you’ll have to imagine me singing this with the look of a frock-begirt Deborah Kerr but the angelic voice of Marni Nixon.  Quite a stretch I fear, but at least I have discovered how to insert notes into a post: so that’s a major step forward for GofaDM!]

This is a terribly insidious earworm which I have now infected you with as well.  A trouble shared is a trouble doubled!  I fear none of you will be able to use the southern reaches of the Northern Line or the home of Surrey county cricket (the club with the fringe on top) without bringing to mind a little of Richard Rodgers work in the King and I.  Luckily for us, and unhappily for the estate of the late RR, there is no PRS to pay as long as the tune stays inside safely your head. 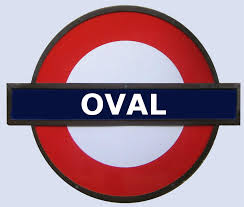 All together now: “Kennington Oval…”