Sorry spreadsheet fans, but this will not be about Lotus 123 – a tool which played such a major role in my early working life.  I still remember those heady days of the mid 80s with an original (monochrome) IBM PC: loading MS-DOS from 5.25″ floppies before I could load 123 from another floppy disk and then finally start work.  There was more time for contemplation of the human condition in those days, while you waited for stuff to happen…

No, this post will be about my latest, waltz-based obsession (a mere couple of centuries after a similar craze swept through Europe) – so should should have been reading the title with the stress on the 1 (an effect I was unable to accomplish with WordPress).

Until recently, I don’t think I have ever believed I am possessed of any particular musical ability.  I have recognised that I can, through diligent application, achieve a basic level of competence and occasional even move beyond ‘banging the f**king notes’ to achieving something almost musical.  These rare moments of ‘flow’ – in the words of Mihaly Csikszentmihalyi (a name which, for some reason, I struggle to remember) – have been particularly precious as a result.  This is broadly the same view I have on my skill with other languages: I don’t have any particular gift in this area, but am willing to put in some effort to try to slightly subvert the all-too-accurate stereotype of the Anglophone abroad.

However, recently I have began to accept that I may have some musical ability.  I think this blog has already laid the groundwork for the fact that I am not tone deaf and that, despite my protestations, I do have some rudimentary sense of rhythm (though a forthcoming post on dance will place an upper bound on that particular skill!).  This week has been more of shock to my long-established self-image.

As previously noted, I had piano lessons for a period in the mid 90s and I have the belief that at my peak I was a weak Grade 4 practical pianist with little or no theory.  Given my rather desultory approach to practice in the couple of decades which have allegedly passed since the mid 90s (for my money, the jury is firmly out on that much time have elapsed) I assumed my ability would have deteriorated.  It was a bit of a surprise when my new piano teacher suggested that in his opinion I was playing somewhere around the Grade 6 level: even more of a surprise given that, while my playing in front of an audience has definitely improved, he has not seen anything like the best of my abilities in action.  He seemed insistent and so acquired, on my behalf, the ABRSM Grade 6 Piano Exam Pieces book for 2017 and 2018.  I believe, on one metric, this is the most expensive book I own at just over 80p per page – however, it is worth every penny! 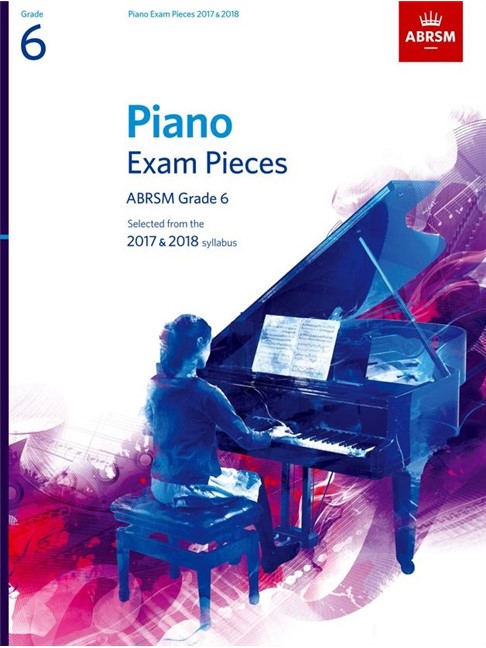 I could almost be looking in a mirror!

My current obsession is piece B:2 the Valse Lente by Oskar Merikanto: a Finn I had never heard of until Wednesday.  It is such a divine piece of music, that while we are only on day 3 of my time with it and it is Grade 6, my playing of it brings tears of joy to my eyes (which frankly disrupts my ability to sight-read).  My right foot even seems to (somehow) naturally make use of the pedal: without the usual panic and mental collapse that adding the use of my foot (to the two hands already committed to the musical project) traditionally engenders. Some of the chords are so heart-achingly beautiful and the way the music moves so glorious that I am constantly amazed that I am allowed to play it.  Sometimes life delivers experiences literally beyond one’s wildest dreams: though this may be more of an indictment on the quality of my dreams (or ability to later recall them) than anything to do with the quality of my performance.

Also in the same book, with which I have had a brief dalliance, when I could tear myself away from the Valse Lente, is Cruella De Vil (from the Disney version of 101 Dalmations) which has the wonderful instruction that it should be played “with swagger”.  Swagger is a little way off, but I’m convinced it lies within my grasp!

There also continues to be progress with the guitar.  I have had to acquire a new tutor, as my old teacher has fled to the Midlands to pursue his musical dreams – which are more extensive than just being spared my ham-fisted attempts on the guitar (or so I like to imagine!).  Whilst attempting a little finger-picking pattern yesterday, we discovered that I could actually inject a little swing into my performance!  (I think we should subtitle this post ‘swagger and swing’).  I even showed a little promise on the subject of knowing when to change chord when accompanying a melody.

I have found myself wondering about this mid-life musical flowering and what might be its cause.  Malcolm Gladwell had made a reasonable living from the idea that 10,000 hours of practice at a skill will deliver mastery: though I vaguely recall this derives from an original study of rather a modest number of Japanese viola players and so may not generalise quite as far as its penetration of the popular zeitgeist would suggest.  I am thinking of writing my own book about the importance of letting any skill lie fallow for a good couple of decades as the key to mastery.  The importance of benign neglect and procrastination I think is under-recognised in today’s always-on, instant-gratification society!

Being more serious, I think having two instruments on the go (three if we count the recorder) may help as insights gained on one feed into the other.  Acquiring a little musical theory has also been helpful as it has provided a framework into which new knowledge can fit.  But, I suspect the sheer amount of time I have spent at gigs across a huge range of genres watching, listening to and even talking with musicians may have provided the largest fillip to my musical abilities.

The way things are going, there is a growing risk that 2017 may see me compelled to play an instrument in public in front of an audience that are not actively engaged in teaching me at the time!  I think a paying audience remains a long way off, so I shan’t be giving up the day job just yet…