My attempts to prop up the failing Zuckerberg empire with my mildly eccentric posting, combined with its ability to direct its more discerning users to this even longer-form example of my “brand”, has caused me to acquire a certain degree of notoriety.  I suspect this is mostly local to the Southampton area, though as any content Liked by a Friend becomes accessible to that Friend’s Friends (and so on, to Kevin Bacon and beyond)  my nonsense may be spreading more widely than I realise.

There is a (heretical) school of thought that believes if a gig occurs in Southampton and I am not present, then it can’t really exist – however, this is not a universal belief.  In conversation after the Tankus the Henge gig on Thursday night, I discovered someone surprised to see me there – I think they expected me to only attend more high brow entertainment: how little they know me and the depths to which my brow is willing to sink!  At last night’s gig – of which rather more later – someone felt the need to explain, after I apparently gave the impression of recognising them from another recent event (in fact, I was staring vacantly into space at the time), that they weren’t following me.

I used to think that were I to shuffle off this mortal coil in my freezing garret, it would be many weeks before the smell of decomposition (slowed down my reluctance to use the heating) caused my remains to be discovered.  This no longer seems to be a major concern!  There was significant traction and amusement last night following a Facebook friend posting that they were at a gig in Southampton and I wasn’t there.  Despite my best attempts, I am still only able to be in one place at a time – though I am working on this limitation…

Anyway, my fame is such that this post was basically commissioned by one of its main subjects (and not me).  Yesterday evening, I took myself to the Art House and managed to find time between scoffing their delicious mince pies to attend a gig by guitar maestros and (probably still) friends Nathan Ball and Jack Dale.  It was Mr Dale who approached me before the gig began seeking a “review” in this infamous cultural institution – I made no promises, claiming it would depend on the quality of the content provided.  As this post will confirm, more than sufficient incidents of moment arose during the gig for me to let my fingers do the walking over the keyboard this morning.  Jack also proposed a title for this post, which I have not used – instead going with the most oft repeated phrase from last night’s fun!  His proposal was “An evening of stories”, but I feel my choice has more appeal to the click bait generation.

While the chaps are friends – and more as I will later reveal – some areas of contention did arise early doors.  Both musicians had CDs on sale at the gig and each played the title track from their musical momentos, but Jack was willing to significantly undercut Nathan on price.  I am unable to report whether this aggressive pricing was reflected in the volume of sales following the gig: sometimes premium pricing can act as a sales driver by suggesting a higher quality product…  For the first half of the gig, the chaps played tunes alternately with some attempt to link each tune thematically with its predecessor though I don’t think the long-running The Chain feature from the Radcliffe and Maconie show has much to worry about.  During this segment there was a notable divergence in use of the capo – with Jack making much more extensive use of his example. 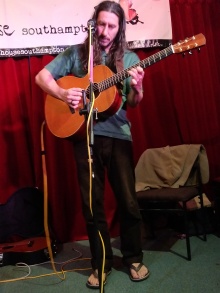 My followers on Facebook will know that I have shown in interest in Mr Dale’s use of the capo and his opinions thereon over recent weeks.  After last night, I am starting to wonder if his use of the capo is an attempt to pass messages in code: either to his controllers in Moscow or Pyongyang or perhaps as a desperate cry for help.  Last night’s code was 35200223, but so far my crack team of cryptographers have been unable to decipher it.  He did also use three guitars – against Nathan’s one – and I wonder if these also have some meaning in the code.  This could be my big Dan Brown moment, a whole series of novels about a middle-aged white guy (me) deciphering the secret codes used by a cabal of guitarists and blowing open some global conspiracy (OK, I’ll admit it, I’ve never read anything by Mr Brown or, for that matter, his wife and their boys).

As well as giving me the idea for the Capo Code™, the gig contained significant intra-song conversation (whether ad-libbed or scripted was left unclear, but if the latter I feel I should throw my hat into the ring as their new scriptwriter) which brought a significant portion of the Ball and Dale back story to our attention.  We discovered that Jack had a surprising number of people called Nathan as best man at his wedding (two!), sadly the number of best men not called Nathan was not made explicit.  The other (better) Nathan(II) also had an important role as duenna, bringing our heroes together.  Back in the mists of time, Jack had stalked Nathan(I) for quite a while before they were brought together by his illicit covering of one of Nathan(I)’s songs.  Nathan(II), a drummer in Nathan(I)’s band, in an attempt to head of any incipient feud introduced Jack to Nathan(I) (I presume without raising any more alarming incidents of stalking: nothing was mentioned directly, but I feel binoculars and rifling through bins may have been involved).  One feud averted, he became an unwitting cause of another as Jack promptly poached him to drum in his band.

The gig also featured the traditional guest slot where a person is plucked randomly from the audience to play the B Minor piano accompaniment to Medicine.  Last night, John drew the short straw but managed to fill Patrick Ytting’s shoes (and indeed the rest of his clothes) in fine style.  I assume ‘John’ will, by now, have been poached to join Jack’s new musical venture as a drum’n’bass collective.

Following an intervention from the world viewing the gig from beyond the confines of the Art House (thanks Samuel, wherever you were!), the much maligned Wonderwall cover was discovered to have played a pivotal role in bringing the gig to the world.  It was shortly after Wonderwall was released, while seeing two fellow sixth-formers performing an early cover version, that Nathan was inspired to take up the guitar and his first guitar tutor was a book of Oasis ‘tunes’.  Despite this inauspicious start, his guitar skills were impressive – and his strumming technique much more in line with my own teachers’ opinions than Jack’s.

For the second half of the gig, Nathan played a few songs (mostly) uninterrupted by Jack  except for the stentorian sound of his heavy breathing, which even unmiked could clearly be heard above the amplified guitar and voice.  The gig closed with Jack accompanying Nathan on a lap slide guitar for the final few songs (well, that and quite a lot of tuning – but, we were reassured that this was atypical with the words quoted as our title).  It was a glorious of evening of music and fun – and yes, I’ll admit it, of stories too!  Almost the whole thing was recorded by Jack (from two separate camera angles) but the cameras ran out of storage space in the final song and so the gig’s stirring apotheosis will have been enjoyed only by those of us lucky enough to be in the room.  Slightly disturbingly, the feed from one of the cameras was continuously displayed on a large flat screen TV to my right – which given that I was clearly visible in the feed, could leave a chap feeling a tad self-conscious and even physically inhibited during the gig.  Living in the world’s most surveilled nation I am probably on camera for most of life, but I can’t usually ‘enjoy’ the footage in real time.  Hopefully, I refrained from doing anything too outrageous on camera (though I was sorely tempted): I guess time will tell…

If this post has a moral dimension, I guess it is to be careful for what you wish.  It also acts as a timely reminder that Jack Dale plus the Art House equals fun times!