As the last post revealed, Southampton has recently been covered by a blanket of snow.  The combination of rising temperatures and (a bumper crop of) falling rain have cleared it from even the best protected of natural pockets (though, for all I know, some may have been preserved in the freezers of the city’s more eccentric residents).  While it lasts, and before it is transformed to filthy black slush by the action of salt and tyres, it rather transforms the landscape. Many of the city’s imperfections and the litter and detritus of daily life are hidden from view. Larger objects, and especially buildings, that remain unburied are garnished with snow: highlighting features that the eye might fail to notice under more normal conditions.

A good layer of snow changes the soundscape of the city too.  Traffic was much lighter than usual, leading me to wonder if there was a snow-related boost in local air quality: though, oddly, it made my sneeze more than normal (my natural cussedness revealing itself once again!).  The traffic which remains leaves a very different sonic trace as do pedestrians with their footsteps crunching through the crystalline white.  Snow acts as the city’s soft furnishings, smoothing the harsh edges off sounds.  I feel someone should have developed a filter or effect to apply to electronically reproduced sound, so that music (or anything else) gives the acoustic impression of being listened to while surrounded by snow.  A project for any sound engineers with time on their hands…

A covering of snow also presents everything in a more literal new light, with objects lit from both above and below.  I suspect this is a great time for those with a double chin to capture an al fresco selfie: though as a man with barely one chin, I have been unable to test this theory myself.  Also, I’m not sure any lighting (other than total darkness) would overcome the terribly awkward appearance that overtakes my face whenever I attempt to capture a selfie.

Having now justified the title in a literal (as opposite to literate or literary) sense, I can now neatly segue into the land of metaphor (or, if you prefer, wander off topic).  The past few days have caused me to see a few other things in a new light.  Even as I sit here, I can see that my music stand is branded “Tiger”: nothing unusual there (if any animal springs to mind when seeing a music stand, it is clearly the tiger) except that I have owned this music stand for many years but only noticed its link to Frosties  about 48 hours ago.  I would make a terrible eye witness!

There was something of a dearth of gigs while the snow lay deep and thick and even (well, lay at least) at the end of last week.  This was bad news for me, I had to fall back on Netflix and staying in, but also for a lot of musicians and music venues (and I suspect other small businesses) that lost out on expected revenue and, which given the generally parlous financial state of such bodies, could be catastrophic.

As well as offering my couch some unplanned quality time with my buttocks, I used some of the time released for an especially long piano lesson.  In general, the hour-long length of my lessons is more of a notional concept than a reality but even by our standards this was a marathon session.  I’ll admit that I did arrive a few minutes late as I was distracted by a pair of long-tailed tits playing in a tree on the way over (I think the long-tailed tit is the most charming of all the local wildlife and it is always comedically pleasing seeing a brace of them).  There is something of the mountain climb (or more hike – I’m not using ropes and pitons) about learning the piano.  At each stage when I feel I am approaching mastery of a set of skills, I discover that what I have been seen laboriously ascending is not the main peak but a very minor foothill and a whole vista of far higher peaks is suddenly revealed.  This happened again on Friday and I am now trying to play a series of chords in a more legato fashion, involving exceeding cunning application of different amounts of pressure and speed of movement from adjacent fingers on the same hand.  I may also wish to start ‘feathering’ the pedal.  The acquisition of these skills is complicated by the relative poor haptic simulacrum of a grand piano which I use for practice while at home.  I am contemplating applying my gymnastic skills to the career of a cat burglar: however, rather than stealing jewels I will use my ability to slip into buildings containing a grand piano for a little practice.  Juxtaposing my hobbies, if you will.

Saturday afternoon, witnessing three virtuoso guitarists in action at the Art House, also suggested that my hard fought ability to mostly play the chord sequence G C Am G D G broadly correctly (if not necessarily quickly) has left me mere millimetres above the valley floor.  Will McNicol, Steve Picken and Clive Carroll were doing things with their fingers that I’m not convinced mine will ever be able to replicate.  Nevertheless, and in common with improving on the piano, it is going to be a lot of fun trying and if recent years have taught my anything it is that an old dog can (eventually) learn new tricks.

The final use of the shoehorn to fit an ugly sister’s foot of an idea into the glass slipper of the title will turn to my blood.  Just before the snow descended, I cycled the steep hill to the General Hospital to give of my corpuscles (and associated fluids) for the greater good (and a mint Club).  In the last year or so, NHS Blood and Transport have begun to text me a few days after each donation to say where my blood had been used.  It is always interesting to imagine a little bit of me living a new life in another town or city, but the text over the weekend was particularly exciting.  My armful has been issued to Birmingham Women’s Hospital and so a small part of me is now living as a woman!  This may have happened before, but this is the first time I can be certain that some of my cells are properly in touch with their feminine side.  In our unequal society, their earning potential and life opportunities have probably taken a bit of a hit, but they will probably feel this to be a small price to pay for escaping my company.  Some of me is experiencing the world in a new light (at least for a few weeks until it is replaced by the new host’s own cells) which is lovely reminder of how much we have in common.  It is oddly miraculous that we can share such an essential (personal, even) part of ourselves to help another – and be rewarded with biscuits from my childhood for the privilege.  It’s nice to know I have some vague utility in this world, even if it is provided by the entirely autonomous operation of my body. 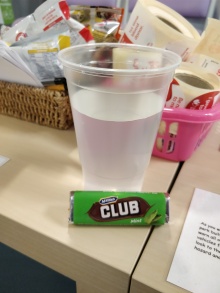 A quick pre-lunch pint and its reward!