I had originally planned to be spending this time at a workshop learning about things rhythmical and folk-related with the splendid people of Folk Active but instead find myself in front of the keyboard, full of cold.   Having a cold was not, of itself, enough to keep me from learning the arcane secrets of the spoons and the jig-doll but this morning, while my body’s doughty defenders attempted to fight off their undead (and unalive) viral assailants, I slumbered on.  By the time I awoke, it was too late – lacking both breakfast and a working teleport – to make it to the workshop in time.

Having fixed one of these lacks – and starting at the bottom of Maslow’s Heirarchy of Needs (so, I remain without a working teleport) – I have decided to work on the principle that ‘misery loves company’ and share a new post with the uncaring world.  I should point out, lest any of you are worried, that I am not miserable.  The sun is actually shining outside and whilst I may have missed one rendezvous with the spoons, the battlefield of my body has delivered a full night of unbroken sleep – something it is generally incapable of achieving during peacetime.  This sleep may also owe something to a couple of glasses of mulled cider and some Night Nurse taken just before bedtime to provide a little +1 Armour for the home team.

As the regular reader will know, I am a frequent commuter across the Irish Sea for work and so am intimate with the passenger experience on a FlyBe Dash 8 Q 400.  I can sing-a-long with the flight safety demonstration and perform the relevant actions better than most of the cabin crew.  I also know Southampton, Belfast City and Dublin (Terminal 1) Airports far better than would be considered to form part of the ideal life.  Despite this familiarity, I remain bemused by the exhortation – issued by the captain or first officer – to ‘sit back and enjoy the flight’.  I am basically in a glorified bus: though it lacks the free wifi, charging point or anything like the legroom or seat width of the local buses.  I suppose it does have wings and is capable of flight which is certainly helpful when crossing an open body of water and beyond the compass of most buses.

Given that the plane’s seats are not placed adjacent to the aircraft windows (if anything they seem to have a window-phobia – perhaps Microsoft related?), added to which the pod holding the engines and landing gear obscures the view from most of the windows, passengers can only obtain rather limited entertainment (usually involving some degree of neck-strain) from observing the ground and clouds unfurl beneath us.  Food is limited, not great and rather over-priced.  The ears are assailed by the constant drone of the engines.  On only a tiny fraction of the FlyBe fleet do the seats recline – enabling one to ‘sit back’ – and given the rather cramped quarters I have never felt it fair to use this functionality and further squash the poor soul travelling behind me.  My feeling is that the only enjoyment to be had on the flight will either come from conversation with the passenger sitting next to you or, more likely, you will have to bring it yourself.  Modern technology makes this straightforward but I feel I am less ‘enjoying the flight’ and more enjoying myself, as best I can, while the flight continues in the background.  All of the enjoyment I have obtained on these flights could easily have been accomplished in greater comfort without the flight!

Is there some flight-related fun to be had on a Dash 8 that I remain unaware of?  Could the low-level vibrations be used to some pleasurable (and legal in public) end?  Should we, the passengers, be playing a high-altitude version of sardines on the flight?  And if so, how would this interact with the allocated seating and the severely nose-heavy nature of the Dash 8?

This last Wednesday, I ‘sat back’ (bolt upright) and ‘enjoyed’ (endured) my last two flights of 2018.  The first was somewhat delayed by the entire check-in systems at Southampton airport crashing and the staff having to return to a hand-written, paper-based system to ensure the right passengers and luggage ended up on each aircraft.  The return took place in the 21st century and it was with a feeling of release (and relief) that I climbed down the ricketty steps for the last time until mid-January. 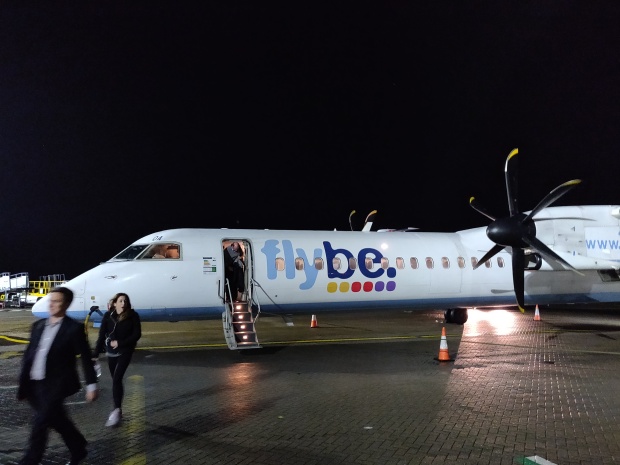 My final sky-chariot of 2018 (not pulled by goats, disappointingly)

It is somehow sad that an activity which would have been miraculous for most of human history and until recently would have been the reserve of a wealthy elite has been rendered so mundane and even tedious.  There is slightly more ceremony involved than catching the bus or train – but only because of security and the relative infrequency of flights and their inability to take standing passengers (though I’m sure Michael O’Leary is working on the latter) – but short-haul flying is very short of romance (unless that is what I should be doing in the air while sitting back?).

On Thursday evening, I once again found myself in ‘a space’ arts‘ Arch 04 for the latest instalment of Playlist.  This started with Karla Powell playing Luciano Berio’s Sequenza vii – the most extraordinarily virtuosic piece for the oboe I have ever seen: it must have been an exhausting 7 minutes and the sheet music looked terrifying!

The concert finished with Tom Moore and Archie Churchill-Moss giving us a modern twist on folk tunes on the violin/viola and the accordion.  As it transpires, this was almost exactly a year since I last saw the boys at the launch of their first album – Laguna – at the Harrison in London.  I rather hope they will continue to name their albums after Renaults and look forward to their sophomore effort: Megane or 19, perhaps.  It is becoming a regular event for Facebook to provide a memory of what I was doing exactly 12 months ago and for me to discover that I had done (almost) exactly the same thing last night.  It sometimes feels like I’m stuck in a time loop – destined to repeat myself until the merciful release of death – or is that just being middle-aged?

However, it is the middle piece of the concert – by Seán Clancy – that is relevant to my thesis.  He is a composer based in Dublin but working at the Birmingham Conservatoire.  As a result, he too spends a lot of time in the air over the Irish Sea – though he has the further disadvantage of using Ryanair, who I suspect make FlyBe appear the very paragon of customer service.  Rather than chanelling this experience into rather too many words, he took the main events of each flight, their typical timings and the engine noise to produce an amazing 35(ish) minute drone piece called Ireland-England.  This he played on some astonishingly compact synths (ideal for the regular commuter to or from Hibernia and quite tempting future purchases for more than one member of the audience!) with a slideshow with various facts about what brings people from the island of Ireland to England (some of which were new to me).  It was an amazing piece and I’d love to have an extended version (which I think is doable) – Southampton to Belfast/Dublin by turboprop takes rather longer than Dublin to Birmingham by jet –  to listen to on my next flight.  I think that this, coupled with some noise-cancelling headphones to ensure that the only drones were Seán’s, would allow me to sit back and enjoy myself (though, I would – once again – be the one bringing the source of my enjoyment).

Tuning the synths… (who knew?)

It is events like these that could send me into a downward solipsistic spiral, but I think I shall continue to treasure my insignificance (even within the human realm) and put it down to coincidence.  Well, that plus the fact that if I go out often enough some things are bound to be linked eventually (and so appear in these pages)…

PS: For any readers pondering the goat reference, Odin’s chariot is pulled by two goats: Tanngrisnir and Tanngnjóstr .  These are then eaten by the gods, before being resurrected by Mjölnir to allow the process to be repeated.  The Norse gods were surprisingly sustainable!

2 thoughts on “Not flying tonight”