Yesterday, I wrote a post about my trip to Poland and describing how much fun my first faltering steps with the Polish language were.  Make no mistake, if you want someone to say “with rum” in Polish then I am your man – but otherwise, the language remains very much an undiscovered country to me.

It would seem that Twitter is reading this blog and taking some of its text to heart.  From this morning, they have started adding adverts into my timeline which are written only in Polish.  Now, I will admit this is geographically much more relevant than their usual offerings, which apply (at best) to those living on the other side of the Atlantic – so a good 2000 miles better targeted.  Congratulations Twitter!  However, none of these ads has yet used any of the limited vocabulary I acquired in Krakow – so they remain a complete mystery.  So, Twitter is still totally failing with even the most basic requirements of an advertisement – in this case, the vaguest hint of reader comprehension (or is this a cunning new take on subliminal advertising?).  Still, according to Nicholas Parsons many a foreigner has learned English from Just a Minute, so perhaps I could learn Polish from mis-directed advertising?

I wonder if I claim to be fluent in Euskara, I will start receiving ads aimed at the Euskal Herria?  Or maybe I should stick closer to home (and my roots) and claim to be fluent in Welsh?  I did watch the excellent 2014 BBC Wales production of Under Milk Wood yesterday and so find myself very tempted by the language of my fathers (look you).  So much so that I have been proof-reading this post in a cod Welsh accent (please feel to try this yourself, it’s a lot of fun!) – so in deference to my forebears, I shall stop now.

No, I have not been out to buy some Mr Sheen (not even, Baby Mr Sheen – Young Master Sheen?) – but as previously mentioned did spend the first half of the week in Poland. Unusually for a business trip, I did manage to see slightly more of my destination than its airport, an international hotel and the road(s) that link them.

My invite came courtesy of my willingness to harangue a crowd any time, any place, anywhere.  I suppose I would have to admit that the unfortunate crowds can’t find the whole experience too objectionable as I do keep receiving invites to deliver more of my schtick (and the reviews are usually decent, though I blame Stockholm syndrome for this).  This particular crowd whilst not my largest, was still a decent size and one of the most senior and by the far tyhe most international ever subjected to my feeble attempts at vocal wit (cunningly disguised as electricity industry insight).

The gig took place in Krakow, which is a rather beautiful city – though it did its best to hide this fact behind almost constant (very cold) fog.  Still, I did catch a brief glimpse of the Wawel Castle and even managed a chilly stroll to the Market Square.  The fog did reveal a useful insight for the aviator (perhaps a slightly grand title for a chap flying with easyJet) which is to pick a flight that arrives and lands around 1pm – this seems to offer the least fog and so minimises delays (~1 hour each way, a far better performance than most of the other attendees).  Given that Krakow airport is largely a building site at the moment (though I’m sure it will be lovely, eventually) it is not the ideal place to spend a long delay – the seating was pretty uncomfortable (almost as uncomfortable as easyJet’s seating).

The event offered a Gala Dinner on Monday night, which was held in a salt mine – some 135m below ground.  This involved a descent in a very cramped and basic lift (but we were VIPs, normal visitors have to use the 800+ steps) and a stroll through tunnels to reach the particular cavern where we were being hosted.  Dinner was great fun – entertaining company plus folk dancing and a comedic (and pulchritudinous) string quartet.  I saw very few peacocks whilst in Poland (none, in fact) and the folk dancing gave a clue as to why – traditional Polish garb requires a surprisingly large number of peacock feathers.  I suspect any local peafowl have become very skilled at hiding! 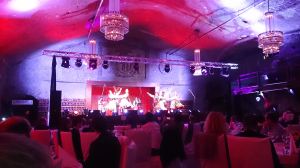 You will be pleased to know that I was released from the mine and, on Tuesday night, I once again went out for dinner – this time in town (rather than beneath it) to the gloriously named Kogel Mogel.  This involved a smaller group – but still contained someone from Northern Ireland, a Canadian, two Colombians, a Swede and an Anglo-American (plus me).

Before travelling abroad, I like to have at least some simple vocabulary – I view it as a basic courtesy as well as potentially helpful.  I didn’t know any Polish at all, so before this trip I attempted to (more-or-less) acquire the skill to say “please”, “thank you” and “receipt” in Polish (which I think you will agree covers most possible conversations in a foreign land).  I was also aware that Polish is basically phonetic – so, as in the old gameshow Catchphrase, you say what you see (or you would if you knew what you were seeing) – and that it has a mere 8 different vowels.  Whilst wandering around, I attempted to extend this vocabulary based on signage – especially that which, like the Rosetta Stone, had the same phrase in several languages.  I also, thanks to John Peel and Home Truths, knew that the city of Lodz (the L should have a stroke through it, but this seem to be beyond WordPress) is pronounced Woodge.  A fair number of Polish words also have a Latinate root (onion does, for example), which helps with the meaning as I can extrapolate from French or Spanish.

Armed with this very basic knowledge, at the restaurant I attempted to order my food in Polish – reading the words from the menu with my best guess as to the phonetics and with a sort of generic East European accent overlaid on this.  This strategy did prevent me from ordering some items on the menu, where I couldn’t even guess how to say the particular combination of letters, but still left a decent range of options.  I’m not sure if my Welsh ancestry helped (a language, like Polish, not afraid to use consonants), but my attempts were surprisingly successful – or the waitress was being unnecessarily polite.  My fellow diners seemed oddly impressed by my linguistic skills (truly, in the land of the blind etc) – if a little worried by my overt eccentricity.  However, we were soon all attempting to order in Polish – I like to think because I made it look so much fun.   As, indeed, it was – if I am to go further with the language I may have to practise speaking without a huge grin on my face (an expression that will not always be appropriate).  There is something wonderful about speaking a Slavic language (or a tiny bit thereof), I think part of me feels like a master spy when speaking Polish.  Southampton has quite a large Polish community, so I am wondering if I should start exercising my new found language skills on them – if nothing else, it may give them something of a shock as I doubt they often experience the locals trying to speak Polish.

So, I would recommend learning even the smallest amount about the language before you go abroad, it can be a lot of fun.  I can also confirm that many of the folk of the international electricity industry make for great company over dinner: I am now sorely tempted to visit Colombia (not something I ever expected to type).