This post will not be about a somewhat extreme form of oligarchy, even if it does seem to be the preferred governance regime in heaven.  Or would that be an autarchy, but one where the autarch has a personality split, like ancient Gaul, into three parts? I’m afraid my O level in Religious Studies did not provide answers to such deep, doctrinal questions and I don’t want GofaDM adding fresh fuel to the fire of the monophysite heresy.

I won’t even be straying into Wiccan magic, chemistry, aviation, programming, survival, mathematics or economics.  The human species does seem to have something of an obsession with the number three and creating rules based upon it – perhaps a rule of four is thought too much to remember and a rule of two too trivial?

Given the form of this blog, I shall stray into writing where the rule of three crops up all over the place.  The unities of ancient Greek theatre is one appearance, but more commonly it appears as a rhetorical device growing from the oral storytelling tradition (which probably links back to fallible human memory).  Just think of all the characters which come in sets of three: pigs, billy goats gruff and musketeers to name but three!  Omni trium perfectum, as they say in ancient Rome (assuming you subscribe to the concept of block time).  However, the choice of title did remind of the rule of three in poetry and, in particular, in my favourite of the poems I studied for English Literature O level.  This was Horatius by Thomas Babington (later Lord) Macaulay – a wonderfully stirring piece for the teenaged me and with a good solid grounding in rhyme and meter, which was a primary part of its appeal in those days before I’d reached an accommodation with free verse.  Stanza XXI offers two particularly fine example of using the rule of three which, as the work is safely out of copyright, I shall share with a new audience:

And nearer fast and nearer
Doth the red whirlwind come;
And louder still and still more loud,
From underneath that rolling cloud,
Is heard the trumpet’s war-note proud,
The trampling, and the hum.
And plainly and more plainly
Now through the gloom appears,
Far to left and far to right,
In broken gleams of dark-blue light,
The long array of helmets bright,
The long array of spears.

It is quite a long poem and I have wasted quite a lot of time, re-discovering its joys.  Next week, quotes from Sir Patrick Spens!

Anyway, that was all by way of introduction and has consumed a worrying volume of words just to say what this post isn’t about.  Now to the matter in hand: yesterday lunchtime, I cycled up to Turner Sims to catch a trio of pieces performed by a piano trio.

The first of these was descriptively called Piano Trio (with whistles) by Ben Oliver, whose name has appeared in these pages before.  For a chap struggling to manage two hands on the keyboard and, at times, both feet on the pedals, it seems a step too far to expect the pianist (and also the violin and cello players) to also play a whistle (or a variety of the same).  I suppose it is probably no more difficult than singing while playing, though you do have the issue of not dropping the whistle and (if me) not drenching the piano in your own saliva.  The piece was rather wonderful and Mark Knoop, at the piano, seemed to be in full command of hands, feet, lungs and salivary glands.

The second piece, Ephemer by Walter Zimmerman, was fascinating and, for more much of its length, almost fugitive in its nature.  The stringed instruments produced extraordinary, ethereal tones – perhaps using a method related to the guitar microtones from a couple of weeks ago as I’m fairly sure the strings were not producing their normal notes when bowed.  I’m not sure whether I like the piece or notbut, like the Tellytubbies when it ended I had the desire to call out “again”.  Sadly (or perhaps happily), I resisted the urge, but now cannot find it on-line – next time, I shall go full Dipsy (or Laa Laa)!

The final piece was 1981 by Clarence Barlow which serves up three piano trios played at the same time.  It only uses the first movements of three trios from somewhat different periods, which are blended together using some form of chiral algorithm.  This was much more melodically and harmonically pleasing than the description might suggest, with each trio wrestling its way to the surface at different times. 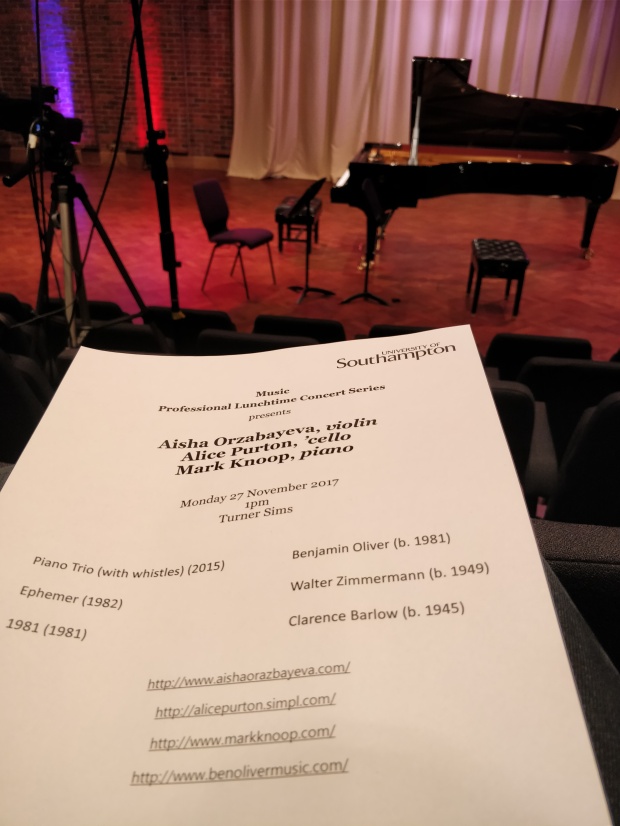 A stage pregnant with possibilities…

When the concert finished, I needed to cycle home again.  So affecting was the music that I was less than convinced that I was safe to operate my transport, though I don’t think it will be too much of a spoiler to reveal that I did survive.  I was forcibly struck by the fact that I have no need for mind-altering drugs while I have access to such extraordinary music.  I’m not saying I achieved a higher level of consciousness (or, indeed, any level thereof) but I certainly felt very different after 45 minutes of musical input – and without any need to break the law!

My day finished at the Guide Dog to enjoy the monthly Doghouse Acoustic Session.  Pleasingly for the conceit of this post, this started with a piece from the Isle of Man – famous not just for tax-dodging, actuaries and a lack of tails but also for being represented by a triskelion of three armoured legs (on field gules)!  Never let it be said that this blog has nothing to offer the visiting Unicorn Pursuivant of Arms!

The final appearance of the number three was in the triangular shape of the Cheese Moments which I used to accompany a series of fine session ales.  I strongly suspect these Cheese Moments have even less to do with cheese than the most militant vegan, but I was without my reading glasses and so the small print of the ingredients was beyond the reach of my visual acuity.  This packet of snacks, and my use thereof, also led me to believe that I may be using Instagram entirely ironically – still, at least I have now found a purpose for it separate from my use of other social media: it is now the home of memetic irony…